This Winchester .22 WRF rifle started out as a standard model 90.  The original buttstock had been badly broken and repaired through the wrist.  Along with the damage to the stock, both upper and lower tangs of the frame had been bent to one side.  Since the rifle had to be restocked and tangs straightened, it was a good candidate to build a Deluxe upgrade.  The tangs were both straightened, then the lower tang bent for the pistol grip.  The tang screw mounting needed to be altered through the addition of a bushing attached to the lower tang for it to screw into.  A new buttstock was made using fancy American walnut.  The original forend was reused.  The entire rifle was then polished and blued with a mixture of rust and nitre blue.  Many of the screws on the gun were also replaced along the way.

Custom stocking a Marlin 39a rifle.

This Marlin 39a Mountie model rifle was in great original condition, but it had the typical fat and crudely shaped stock and forend that was typical of newer Marlin rifles.  The owner wished to make it a custom rifle with more of a traditional look to it.  A beautiful piece of Claro Walnut was used to make the new stock and forend.  The buttstock was crafted with a Ballard style RH cheek piece on it and a Neidner checkered steel buttplate.  The forend was made to be very slim as to better accent the lines of the rifle and give it a classic look.  The slim forend and wrist along with the longer length of pull makes the rifle appear to be longer than it really is.  A traditional Marlin “Style C” checkering pattern was cut in at 24 lines per inch.

This high grade Parker hammer gun was built in 1874 and was in good overall condition for its age.  However, the owner wanted the gun freshened up a little.  Along with a good cleaning, it got a checkering recut.  The original checkering was all visible, but was worn in some areas but mostly filled in with dirt and old stock finish that had been added.  The original pattern was all recut but not fully pointed as to maintain an older look.

Special guns can be passed down through families or given to people for birthdays, military graduations or various other special occations.  A great way to commemorate an event or a special person is to do a classic brass, silver or gold inlay in the stock.  A common place for these on classic guns is in the toe line of the stock, the bottom of a grip or in the side of the butt.  Below is an example of this done to a Browning A5, a gun passed from grandfather to grandson.  The engraved brass inlay commemorates the life of the grandfather.  Engraving done by Geoffroy Gournet. 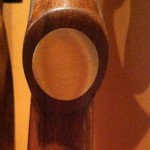 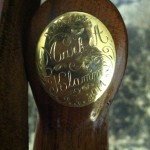 Freshening up a Parker GH 20g.

Eighty years of use had left this 1932 vintage 20g. GH Parker in well worn cosmetic condition.  However, despite the amount of hunting it saw, the gun was pretty well cared for.  The original stock finish was very worn and completely gone in a lot of areas.  Checkering was half worn flat.  The wood had various marks and gouges.  The buttplate was cracked and half gone along with the toe of the stock broken off at the tip.  The barrel blue was in about 70% condition with no major pitting issues.  The owner of this gun wished for it to be freshened up so it would present better, but not to be made to look like a new gun.

The buttplate was replaced with a new one and the toe of the stock repaired.  The stock and forend was worked over to remove any dents and damage that was on the surface.  A fresh shellac finish was applied and all checkering recut.  The barrels were polished out and rust blued.  And the trigger guard was nitre blued.  Other small parts like the triggers and safety were elected to be left in original finish as to fit in with the condition of the rest of the action. 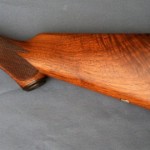 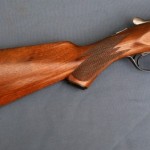 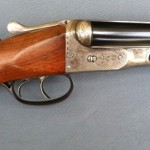 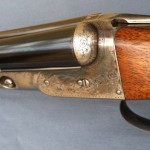 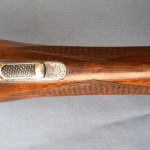 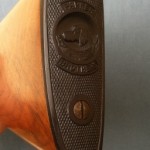 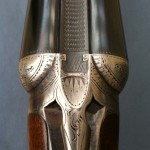 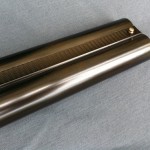 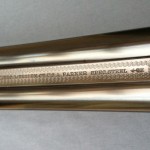 Performing a “Butt Transplant” on a 98 Mauser

This K98 Mauser had a buttstock that was too short for its owner to comfortably shoot due to the non-adjustable claw mounted scope.  It needed about an additional 1″  to 1.5″ of length.  And the addition of a thicj recoil pad was not an option because the existing buttplate was a military mauser type with long extention on top with a screw into the top of the stock.  A utilitarian wood extention could have been put on, but it would have been unsightly and the owner also wished for the stock to be refinished, checkered and ebony accents put onto it.  The solution was to remove the back half of the stock behind the grip and install a donor back half from another stock.  After the repair and finishing, new checkering was cut.  The repair seam is fully hidden by the rear checkering border of the wrist panel. 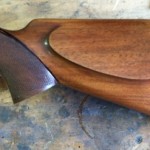 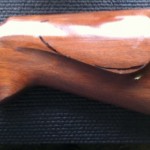 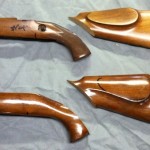 Both stocks cut off behind grips

The donor rear attached to the original front 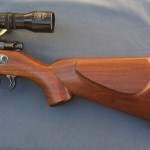 The repaired stock after shaping, staining to match and finishing 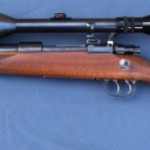 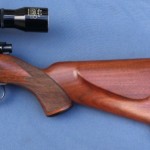 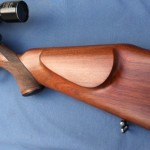 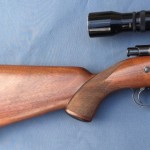 This fine Parker hammer gun had at one time its checkering worked on by an untrained hand.  The forend had an attempt at a full cover checkering pattern, which got badly out of control in the rear section.  And the wrist checkering was full of over runs and the patterns did not match from one side to the other.  Also, details in the wrist area were worn out with age.  Such as the drop points and the pointed “hump” on the top of the wrist was nearly indistinguishable.  Below are before photos. 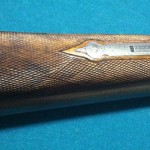 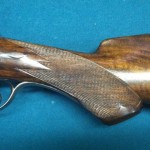 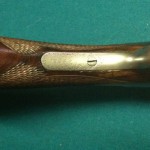 The forend was beyond repair and needed to be replaced.  New checkering in the correct grade 3 pattern was laid down on it.  The wrist of the buttstock was able to have the old checkering removed completely and in the process, the drop points and other important features were able to be re-defined.  The buttstock was refinished and new checkering cut in the wrist.  Below are final photos of the result. 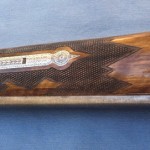 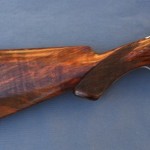 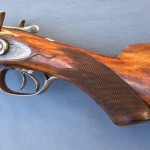 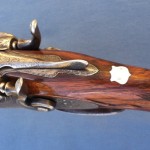 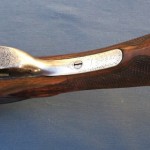 This subject grade 3 hammer gun is the PGCA 2014 raffle gun.  Tickets are available for sale.  $5 each or a book of SIX for $25. If you are interested in purchasing tickets, please contact me.  Or inquire with the PGCA directly.

This fine Parker CHE had at one time had a non original Beavetail Forend (BTFE) added to it.  A proper forend iron was fabricated for it, which utilized the draw bolt in the nose of the forend.  However the forend wood itself was the issue.  It was very fat and had a large belly on it.  The latching mechanism had crude alterations done to it and the forend had a hard time staying on the gun under recoil of firing.  The finish of the wood was also very dry and the checkering was in no way correct for the gun.  The below photo shows the forend in its beginning state. 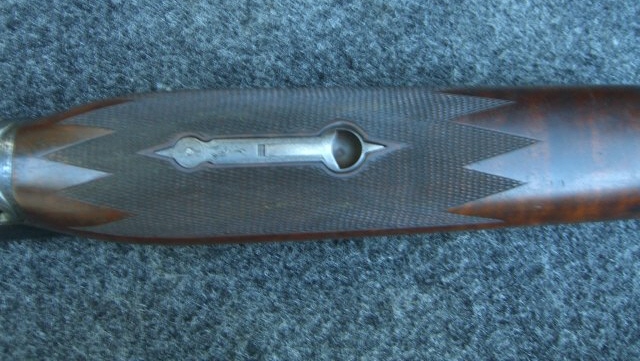 The forend latch lever and also the locking key had to be replaced due to the crude alterations that had been previously done to them.  The Forend wood was able to be reshaped into a proper form for a Parker BTFE.  The belly on the bottom was removed by ferther inletting the forend latch by about 1/4″.  The sides were slimmed down and the nose reshaped to make a very pleasing forend on this fine gun.  And finally, proper checkering was added to complete the job.

While checkering the stock of a custom built low wall rifle I decided to take the opportunity to document the process and share it here.

The first step of checkering any stock is laying out the pattern.  Be it a replication of an original pattern or a custom creation for a one of a kind stock, the step is crucial.  When replicating original patterns, paper templates made from rubbings of original patterns can be a helpful guide for laying out.  However, every single stock is different and no two patterns are identical.  A wax pencil and flexible rulers are used to lay out the design.

Next, spacing of the lines can begin.  For this pattern, I am using a 24 line per inch cutter.  The tool follows the previously cut line while also cutting the next one.  All the spaced lines follow the two master lines.  Refering back to the previous section where I mentioned how the front of the pattern was left open; you can see in the photo above how the front of the pattern is now closed in as the upper leading point was defined by the cut lines that spaced off the rear master line.  One of the most important things in working a checkeirng pattern is to learn when to box yourself in and when not to.  The front of the pattern is being allowed to take form on its own.

I wanted there to be a center point at the front of the pattern, so as I complete the spacing of the lines that point is added.  The above photo shows the pattern fully spaced out.  The next step is to deepen all of the lines in order to point up the diamonds. 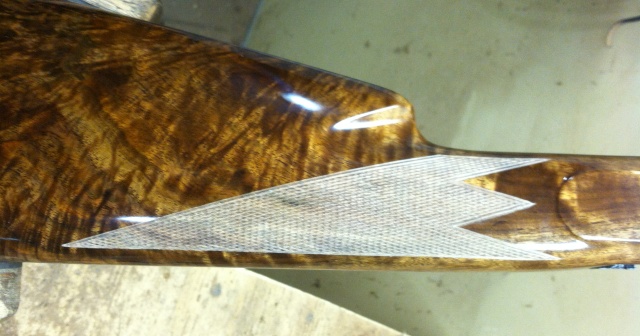 The above photo shows the pattern fully cut and pointed.  It takes about 3 to 4 passes over each line in the pattern to bring the individual diamonds to the full point.  First they are deepened with a 60 degree cutting tool and final pointing up is done with a 90 degree cutting tool.  Some factory checkering on low grade guns are not fully pointed.  For this pattern I put a single bead border on just the front and rear of the pattern.  The upper and lower parellell edges are left borderless.

Finally, a coat of penetrating sealer is brushed onto the finished checkering as to darken it and protect it.  The grain of the wood shows through the checkering and the finished result is a very attractive final touch to a custom stock. Below are photos of the assembled rifle. 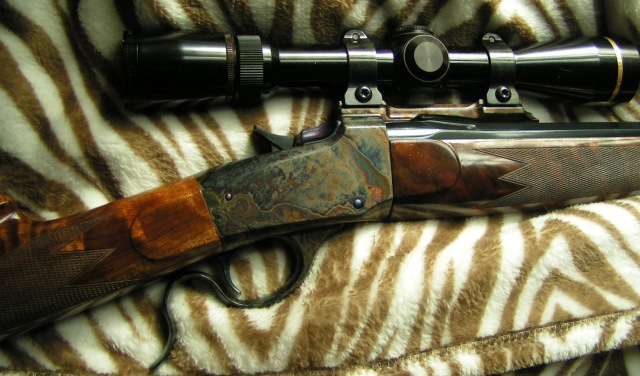 This Parker VH has belonged to and was passed down through the owners family since it was purchased new in 1901.  It had been used a lot as a working shotgun.  The buttstock had been very badly damaged and crudely repaired with screws, tie wrap, etc.  The trigger guard bow had a second screw run through it at the rear that went right through the engraved serial number.  And the forend had a deep 4 inch long scratch running through the checkering pattern.

A new buttstock was made using grade appropriate black walnut.  The original grip cap, buttplate and stock shield was reused.  An original style amber shellac finish tops off the new wood and fresh checkering was cut on the wrist.  A replcement guard bow and new screw was used.  The correct serial number and border engraving was recut by Geoffroy Gournet before being reblued.  The damage to the forend was repaired, fresh finish applied and checkering recut to nearly hide the damage that was done.

This revived VH can now continue to serve the family it has been in since 1901 and be passed down through ferther generations to come.